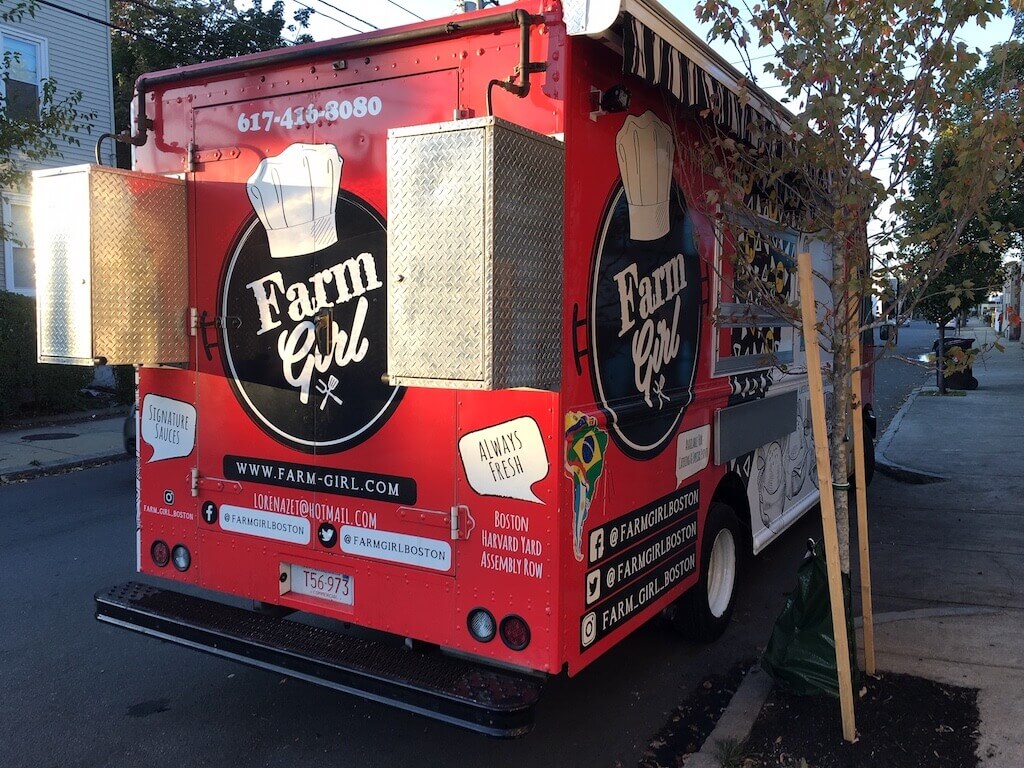 I have always liked Brazilians. They are a resilient bunch. They can go through devastating cycles of poverty, corruption and dictatorship, yet figure out how to survive through imagination. They are like their national soccer team, individually brilliant, but sometimes organizationally self-destructive.

Lorena is a young Brazilian woman who runs a business called Farm Girl in our shared kitchen at Stock Pot Malden.  I remember meeting her the first time when she walked into our door without the required appointment, a baby in her arms.

“I have put all my savings into a food truck”, she said, “and I am told I need a commissary. Would you take me?”

We were full and had a long waiting list, but she had a disarming smile, so we agreed to give her a tour if she came back without her baby. She pointed to an older gentleman who was with her – it turned out to be her husband – and put the baby in his arms. “Could we go now?” I knew any resistance would be futile. A few days later, we signed a contract.

Before she even moved in, there was a small incident where her husband expressed strong dissatisfaction in inappropriate language to a member of our team. I reminded her we had done her a favor and were not going to be friends long if this was a sign of times to come.

“We Brazilians have a big mouth, but we mean well”, she said, handing us a bag of pãn de queijo (Brazilian cheese bread). We decided she was OK. We are not beyond food venality.

Food truck life can be tough. The city of Boston has a lottery system that penalizes rookie trucks, so Lorena had to feed off scraps her first year. She developed a following in Somerville but encountered hostility from local merchants and trucks. I remember receiving ominous phone calls asking us for the personal address of the owner of the Farm Girl truck. When I passed that on to Lorena, she looked at me unfazed, as if to say: “I’ve seen worse in my life”.

She’s constantly creating new foods and reinventing her business model. Her anchor heritage is of course Brazilian –she credits her grandmother for the awakening of her palate as a child — but she’s also a student of Latin American flavors and can take you by the hand on a culinary exploration of empanada variations in various Latino cultures. She started out as a food truck but has since parlayed her craft into working as a much in-demand caterer to various corporate food brokers in Boston. She’s constantly making up new dishes and nothing is more fun for me than running into her at the end of the day, as she is developing new recipes. I’m never sure whether the greatest fun lies in tasting her food or listening to her talk about it.

But Lorena can be hard to help. Like many culinary creative people, she is not terribly interested in the business side of her operation. Her web site is hard to find and confusing. She has a hard time figuring out which channels and customers are profitable for her. She attracts new opportunities which she does not take the time to explore: potential partners would like her to give cooking lessons, others are offering to partner with her in opening up take-out pods in the city. Several of us think she has franchise potential.

What stands in the way? Lorena is of course extremely busy, as a young mother with a baby running a food business. This is overwhelming in itself. But something more seems to be at play. Lorena is a survivor and has learned not to trust anybody. Several people have offered to help for free with her accounting or finance, her business strategy or even food preparation. Her gaze becomes instantly suspicious and you rapidly understand this is not in the cards. When you’re a young immigrant woman fighting in the macho world of food, you can’t take the risk of relying on others.

Overcoming the survivor syndrome is something our incubator has not yet figured out. We hope to get there someday.